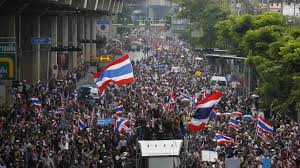 The cyberactivist, the poet Sirapop Korn-A-Rut, has been detained at the Bangkok Remand prison since June 2014 and faces up to 45 years in prison under his country’s restrictive lèse majesté laws, or laws penalizing any publication deemed offensive to the Thai King.

“Sirapop has written about a wide range of issues dealing with the contemporary political and legal climate in his country, a brave act that cannot be honestly done without dealing with the institution of the Office of the King of Thailand,” said lawyers Harry Roque and Romel Regalado Bagares, chair and executive director, respectively, of CenterLaw. “In doing so, he has run afoul of the lese-majesté laws of the Kingdom of Thailand, which he has also considered to be a long-standing instrument of political repression and oppression in his country.”

The Thai cyberactivist, whose situation was brought to Centerlaw’s attention by the Thai internet freedom group Internet Law Reform Dialogue (iLaw), is accused of publishing several allegedly libelous poems online against the Thai King sometime between November 7, 2009 and June 30, 2014 under the pseudonym “Rungsira.” One poem (Shut the news, closing the eyes, buffalos are tearful, because the tiger may die) Pid-khao-bod-khloa, Kra-bu-ram-hai, Duay-wa, Pa-yak-ka-jak- ka-wai, was posted on the web board of the“Prachathai” website (www.prachataiwebboard.com).

This carried a caricature of an crowned old man with a Swastika on his military uniform sleeve accompanied by the text “…being an angel, why does one have to walk on the soil, overlook the ground surface, even if having normal food every meal, being modest, because we are faithful, with two hands we build up ourselves…”

The same caricature with the text “Prince Baworndesh the head of the rebels, Din Tarab the army leader of the rebel, Sulayut Julanon the Grandson of the rebels, the Angel the King of the rebels, Suthep Thaugsuban the Southern rebel, Sondhi Limthongkul the Chinese rebel,” also appeared on his blog (http://rungsira.blogspot.com/2014/01/blog-post-22.hlml). All of these were purportedly placed and made available online by Sirapop during Martial Law in Thailand.

The human rights group Amnesty International reports that around 511 activists, students, academicians and journalists have been arrested and arbitrarily detained, in violation of their rights to freedom of expression and peaceful assembly, since Martial Law was declared in the country last May 20, 2014.

Authorities have used security legislations and lese-majesté laws to suppress even peaceful dissenters to such extents that enforced disappearances, torture and inhumane treatment were carried out, prosecutions of criminalized political activities were hastily made, media was bullied into silence and self-censorship, and human rights safety mechanisms were set aside.

In their 16-page petition to the Working Group, the Filipino lawyers said Sirapop is clearly being arbitrary held and tried simply because he has chosen to exercise his right to free expression and to participate in public affairs in his country, which rights are protected under international law, including the International Covenant on Civil and Political Rights, of which Thailand is a party. The Thai cyberactivist is also being denied his right to a fair trial, according to the petition.

The UNWAD is a specialized UN human rights mechanism dealing with urgent cases of arbitrary detention any where in the world. While its rulings are non-binding, these are considered authoritative on the state of international law dealing with fundamental human rights. Over the years, its interventions in the situation of many human rights activists in repressive states have yielded positive results.

Centerlaw cited a view issued by the UN Human Rights Committee in the case of jailed Filipino broadcast journalist Alexander Adonis, which Centerlaw had brought before the Committee. “In its view in the Adonis case the UNHRC said that criminal libel is incompatible with the freedom of expression protected under Art 19 of the ICCPR,” it said in its Petition filed on behalf of Sirapop.

Thailand’s ruling military junta has scrapped the country’s old Constitution and replaced it with an interim charter that denied the right of appeal to citizens convicted of violating its lese-majesté laws. As in Sirapop’s case, it has increasingly used military courts to prosecute alleged offenders without a public trial. Centerlaw argues that thailand’s military tribunals are not independent of the Executive and the lack of an appeal removes any possibility of a remedy against its judgments.

Mae Sot, Thailand– A.P, a 19-year-old student from Burma, is a child of his country’s so-called “Lost Generation.”

A sophomore studying the Burmese language as a distance education student in Rangoon, Burma’s old capital, A.P. is in this border town in Thailand’s northern reaches with four other students to attend a training conference on free expression organized by my organization, the Center for International Law (CenterLaw), and its partner-institution, the American Bar Association (ABA).

“My parents don’t know I’m here,” he tells me later over dinner at the end of the intensive two-day conference.

“But I have to be here.” Unlike most of the 32 participants in the training conference, he could speak intelligible English, and he exuded the bravado that could only come from a young man with a clear vision of what he would like to be in the future.

In 1988, the Burmese military junta shut down the country’s state-run schools and universities following wide-spread student uprising. Many students were arrested, but many more left the country as refugees. It was an unprecedented brain drain like no other, as young professionals – doctors, lawyers, engineers, teachers, scientists – followed suit. But the Burma’s generals couldn’t care any less. For them, the fewer the critics at home, the better.

What ensued was unmitigated academic disaster, the result of an egregious crime against the life of the mind. Students of the era who suddenly found themselves with no schools to go to were called the “lost generation” by the foreign press. Years later, the junta would eventually allow the reopening of schools but only under their close supervision and with such watered-down standards that for many, it didn’t make much of a difference had the schools remained shuttered down.

The few who could afford it went to private schools that sprang up like mushrooms in the wake of the closure of state-run schools; most, however simply found their academic life – and their youthful dreams – taken away from them. When I ask A.P. what his parents do for a living, he replies that his father runs a small shop while his mother is a school teacher.

A.P.’s parents must have been students themselves at the time when the generals ordered all state-run schools closed down. But he wants to do more than studying. He wants to enter politics and help shape a future Burma without its junta of generals. But for that he must prepare, he says.

“That is why I want to study political science too.”

In 2007, Burma was rocked by a new wave of protests sparked by the junta’s unannounced decision to remove fuel subsidies to public transportation in the oil and natural gas-rich country. Thousands of monks, joined by students, took to the streets to launch civil resistance. Western observers thought the “saffron revolution” would finally topple the Burmese dictatorship. Instead, it was violently suppressed by the military junta.

The junta has been in power since 1962. In 2010, it supposedly transferred power to a civilian government, now headed by President Thein Sin, although many of its military leaders still dominate the government.

Indeed, student activists of A.P’s new generation must still face ruthless generals whose heartless ways were demonstrated yet again two years ago when they blocked international aid for victims of the international cyclone Nargis, which had killed an estimated 140,000 Burmese.

Julian Assange’s Wikileaks would later reveal that the junta’s leader, General Than Shwe, the commander-in-chief of the armed forces, in the aftermath of the calamity, had thought of making a US 1 billion dollar bid for the Manchester United football club.

A big fan of the football club, the general backtracked on the plan because it might “look bad”, according to Wikileaks. Instead, Than Shwe created a new Burmese football league worth millions of dollars, all this while many survivors of the disaster waited in vain on his government to provide them with permanent housing, access to clean water, and tools for fishing and agriculture.

The junta also sentenced to 35 years in prison Burma’s most eminent comedian, Zargana, who had spoken critically of the government’s slow action on the destruction the cyclone left in its wake.

One shudders at the thought of what other horrors a humor-less government who does that to a comedian is capable of doing.

But more recently, under intense international pressure, the Burmese government promised a package of reforms and in a gesture observers said was meant to improve its international image, ordered the release of large groups of political prisoners.

Only last month, in its most significant step yet, the government freed more than 600 prisoners, including the most prominent student, democracy and minority leaders and military intelligence and army dissidents jailed in 2004.

At our training conference, A.P. and his fellow students – most of them in their late teens – wore white T-shirts with the words “Free Expression” printed on them. They were an interesting contrast to the older participants at the conference, including some who had spent years in jail for their political activity and a handful of monks.

The participants came from all over Burma from various organizations that banded together to form the Action Committee for Democracy Development (ACDD), a political alliance representing monks, ethnics, youth and student activists of the 1988 and the 2007 generations.

Not a few traveled for at least four days to get to the conference venue, a small resort tucked away in a hilly part of Mae sot. Most of them did not have travel documents – which is why the ACDD chose a resort with  nondescript surroundings as conference venue.

And all of them appeared to be skeptical of the government’s recent gestures of goodwill.

They say it’s all for a show, done to justify Burma’s turn to chair the Association of Southeast Asian Nations (Asean) in 2014.

There is of course, the wide-ranging sanctions imposed by Western nations on Burma that need to be lifted.

DNA, the well-known Burmese political dissident who assisted us in putting together the conference, told as much to me when I asked for his opinion on the question. Still, there is work to be done, and he agrees that training conference like ours are much needed. Indeed, I saw for myself the participants’ eagerness to learn, the language barrier and the sweltering heat of the sun in Mae Sot notwithstanding.

A.P. himself says he will vote in the forthcoming parliamentary elections announced by the civilian government. He looks forward to seeing newly-released opposition leader Aung San Suu Kyi and her National League for Democracy (NLD) emerge victorious in the elections. It will be the first time in two decades that the NLD is joining the parliamentary elections, which is  the first to be held in 22 years.

“Our youth association shares the same goals with her,” he says. “But it doesn’t mean I want to belong to her political party.”

At the dinner, everyone is boisterous. Thai beer and food went well with their Burmese version of the videoke. “We’re all happy tonight,” says A.P., a teenager with a well-chiseled face, an easy-going manner and a smile on his eyes. “Tomorrow we all go back to Burma and we will not be seeing one another for a long time.”*

Click here for the link to my column for the Iloilo News Today where this essay first appeared.